Are You Being Hypnotized by Your TV?

The more that is discovered about human consciousness and behaviour, through observation and ever improving advanced technological research, the more is learned about how to control human beings. However the most powerful medium for takeover is already in place? The television set in your lounge room and bedroom is doing a lot more than just entertaining you.

When you watch television you automatically enter into an alpha state and transfer into your right brain. The result is the internal release of the body's own opiates, encephalons and Beta-endorphins, chemically almost identical to opium. In other words, your mind feels good, and you want to come back for more.

Recent tests by researcher Herbert Krugman showed that while viewers were watching TV, right-brain activity outnumbered left-brain activity by a ratio of two to one. Put more simply, the viewers were in trance more often than not. They were getting their Betaendorphin "fix". To measure attention spans, psycho-physiologist Thomas Mulholland of the Veterans Hospital in Bedford, Massachusetts, attached children to an EEG machine that was wired to shut off a TV set whenever the children's brains produced a majority of alpha waves. Although the children were told to concentrate, only a few could keep the set on for more than 30 seconds!

Most viewers are already hypnotized. To deepen the trance is easy. One simple way is to place a blank, black frame every 32 frames in the film that is being projected. This creates a 45 beat per minute pulsation, perceived only by the subconscious mind, the ideal pace to generate deep hypnosis. The commercials or suggestions presented following this alpha-inducing broadcast are much more likely to be accepted by the viewer. The high percentage of the viewing audience that has somnambulistic-depth ability could very well accept the suggestions as commands, as long as those commands did not ask the viewer to do something contrary to his morals, religion, or self-preservation. 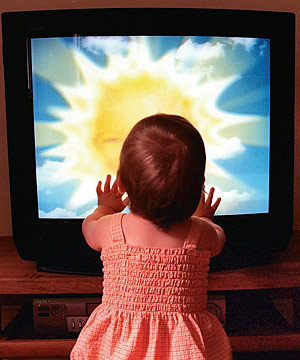 The medium for mind takeover is here. By the age of 16, children have spent 10,000 to 15,000 hours watching television, which is more time than they spend in school! In the average home, the TV set is on for six hours and 44 minutes a day. This is an increase of nine minutes from last year and three times the average during the 1970s. It obviously isn't getting better. We are rapidly moving into an alpha-level world, very possibly the Orwellian world of 1984, placid, glassy-eyed, and responding obediently to instructions.

A research project by Jacob Jacoby, a Purdue University psychologist, found that of 2700 people tested, 90 percent misunderstood even such simple viewing fare as commercials. Only minutes after watching the screen, the typical viewer missed 23 to 36 percent of the questions about what he or she had seen. Of course they did, they were going in and out of trance! If you go into a deep trance, you must be instructed to remember, otherwise you automatically forget. When you start to combine subliminal messages behind music, subliminal visuals projected on the screen, hypnotically produced visual effects and sustained musical beats at a trance inducing pace, you have extremely effective brainwashing. Every hour you spend watching the television set you become more conditioned. There are a lot of powerful people who must prefer things the way they are. Maybe they have plans for…?

There is an article on Persuasion Techniques you can read here for more information on mass manipulation.

If you are worried about how much TV your child watches - the Doing It Right Now children's CD will get them motivated into more positive action and getting out and about doing things rather then sitting in front of the 'box' all day watching TV and playing video games.

If you are worried about how much TV you watch - or if you are concerned about falling victim to manipulation techniques - then you can fight fire with fire and 'hypnotize' yourself into greater awareness by using the Personal Life Motivation CD or MP3 to free yourself and regain your individuality and freedom of choice.