The Pineal Gland - How to Activate Your Third Eye 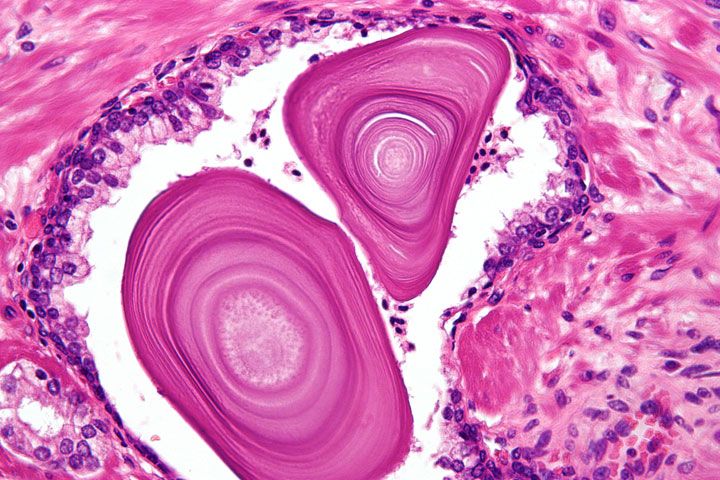 The mage above is a closeup picture of the Pineal Gland courtesy of Wikipedia Creative Commons - http://upload.wikimedia.org/wikipedia/commons/b/b5/Corpora_amylacea_high_mag.jpg

Nestled deep inside the middle of your brain rests the pineal (pronounced. pie-neal) gland. The pineal gland is one of the most mysterious glands of the human body and has many mystical properties.

In the 1600s French philosopher René Descartes believed it to be the seat of the soul. Modern scientists have found it produces melatonin, which regulates sleep patterns and sexual development. It also protects our bodies from damaging free radicals.

But scientists are missing some of the most important features of the pineal gland – it acts like an inner portal that connects us to other dimensions, such as the dream and spiritual planes.

Today the pineal gland in most people is not activated because of electronic pollution and fluoride in tap water and toothpaste. However, pineal gland activation is possible if you know how.

Is the pineal gland The Third Eye?

In spiritual texts the pineal gland is often called “The Third Eye”. It looks like a pine cone. But if it was cut open it would resemble an eye. The interior walls of the pineal gland are made of rods and cones that are similar to those in the retina in our eyes. Perhaps this is why ancient civilizations and spiritual teachers always associated the pineal gland with the third or inner eye.

Unlike our regular eyes, the pineal gland has the ability to see both physically and intuitively. The metaphysical properties of the pineal gland are most noticeable when we are asleep. Have you ever had an experience when you were about to fall asleep and started seeing your surroundings with a 360° view? This is your third eye being activated by your pineal gland. It is the all-seeing eye.

There are seven chakras in our bodies and the pineal gland is the sixth one. All of the chakras should be balanced for optimal performance of body and mind. Pineal gland activation helps the sixth chakra to reach its potential, which includes clairvoyance, psychic abilities, imagination, and dreaming.

How to decalcify your pineal gland

The worst substances for the pineal gland is fluoride (sodium fluoride). Fluoride is extremely harmful to the pineal gland because it disrupts the gland’s natural functions by calcifying or hardening its interior walls. Fluoride is also very toxic to the brain and other organs of the body.

Use a water purification system that eliminates fluoride, stop using fluoride toothpaste and refuse fluoride treatments at the dentist.

An iodine supplement can help the body remove fluoride. Organic kelp is high in natural iodine.

If you can, switch to raw organic food. Meat should be avoided as research has found that animal DNA interacts with the pineal gland and disrupts its ability to reach its full potential. Many non-organic foods contain harmful chemicals and heavy metals which toxic to the pineal gland.

Supplement your diet with:

Purify the air in your home with an ozone machine or air purifier. Breathing pure air is important to activate the pineal gland.

Remove all electronics from your bedroom including computers, telephones and TVs, or anything that will emit light or distract you from your meditation or sleep. The pineal gland needs pure darkness to emit melatonin, which produces serotonin. These chemicals are crucial to psychic awareness.

How to Activate Your Pineal Gland

The most important step in activating your pineal gland is to raise the frequency in your body. This can be done through meditation, visualization yoga, chanting, dancing, drumming, Tai Chi, and Qigong. Any of these methods will help to open the third eye and help you see beyond the physical world.

Light is one of the stimulators for the pineal gland. You can do a mediation that includes a beam of light. One method is to close your eyes and focus all of your thoughts on the pineal gland. Send beams of light to the following locations, in this order: your front side, the back of your head, to the left of you, to the right of you, straight up, and straight down. Breathe in deeply thought your nose, and then exhale through your mouth. Repeat all the steps several times before relaxing and opening your eyes.

Perhaps the most famous prophets of our history all have undergone pineal gland activation. Why not take steps to activate yours?