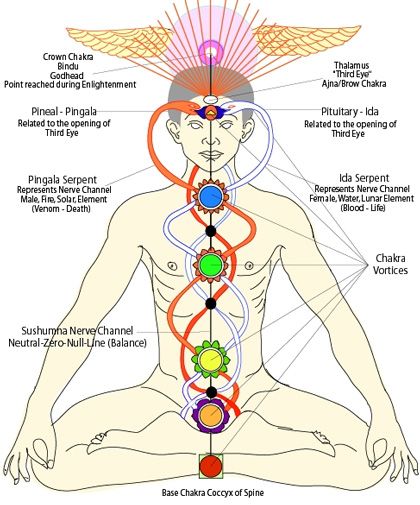 Diagram of the origin & progression of the Kundalini through the chakra points when it is awakened:

* First of all it is important to note that Kundalini is not recognised by medical science. Secondly this article primarily serves as a source of information, precaution, and possible reasoning behind this phenomena.

Kundalini is the energetic or functional aspect of Hindu and Buddhist tantric teachings. References date as far back as the 11th century. Said to be a powerful cosmic energy that lays dormant at the base of one's spine it is symbolised as a coil or curled up snake (hence the association with being the 'sleeping serpent'). This energy is extremely powerful and is often described as the pure essence of self and the universal creative impulse.

When activated (a 'Kundalini Awakening') the energy is said to travel from the base of the spine (root chakra), all the way up top of the head (crown chakra), activating all the different chakra points along the way. Facilitating spiritual awakening, the prolonged practice of kundalini meditation over time is said to expedite spiritual advancement, increase connectedness with self and others, deepen meditative, and have many other transformational effects.

How To Awaken the Kundalini?

Kundalini awakening typically manifests through the intensive practice of various techniques designed to stimulate the dormant energy. Such techniques are usually divided into Active and Passive modes of practice.

Like many spiritual practices (especially those adopted by modern Western cultures) the time taken and methods used to reach an awakening differs. For example, in traditional Yoga and Tantra teachings it is necessary to first establish a strong foundation in preliminary practices before any attempt at waking the powerful Kundalini energy is undertaken. This quest could literally take years or even decades to fulfil. Other schools of thought (especially modern) suggest an awakening can be 'forced' and hence be achieved in shorter time periods. This however leaves a few questions to be answered... as we will cover further in this article.

Commonly reported experiences of Kundalini include:

Importance of 'Purpose' & Understanding of One's Self in the Awakening

One of the most important, and often misunderstood concepts of Kundalini, lies within the path and purpose one has for seeking an awakening. Equally important is the emotional state of the seeker, and their understanding of their own self. These ultimately affect the outcome and onset of the experiences. What is the reason you want to undertake the journey? Is it for true spiritual enlightenment, personal development, and is it congruent to your belief systems? Or is it because everyone at the local yoga club is doing it and you want to fit in, impress people, and tick it off your 'to do list'? In other words 'Spiritual Materialism'. Be careful if you fit into the latter because mixing ignorance with power is a dangerous combination! The nature of the processes involved with seeking a true Kundalini experience means there can be implications if you do not have a full understanding of your self and the reasons for which you are doing it.

The negative repercussions associated with Kundalini Awakening are collectively grouped into what is known as the 'Kundalini Syndrome'. Funnily enough, the Kundalini Syndrome has greater scientific and academic acknowledgement than the actual concept of awakening the Kundalini itself. Not only does emphasise the inherent dangers of practicing it, but it also gives merit to other forces being at work here rather than simply the effect of the energetic release in itself. This is very important to take heed of, especially if you are considering embarking on such a journey. As listed above, there are many negative symptoms that can arise from incorrect practice. These are real consequences and as such proper mechanisms should be put in place to steer clear of them.

The possibility of adverse reaction can be said to be congruent to the purpose and emotional state of the person practicing the awakening. The majority of the symptoms listed above arise from incorrect practices and lack of preparatory work on the foundations.  It is important to make sure that you are emotionally stable before undertaking these practices, as well as ensuring that your understanding and motivations of and for the practice are appropriately balanced.

Some Important Points to Consider in Our Opinion...

The physical effects experienced during Kundalini make perfect sense when put into the context of the mind-body connection. The nervous system (being very much interconnected with the brain) means that the effect of thought and emotion on the physical body is at times quite profound. For example 'eerie' thoughts can give us a tingling feeling or make our hairs stand on end. This type of reaction is particularly relevant to the 'active' processes used to onset the awakening like meditation. The strong shift in thought and brainwave activity, especially during meditation, can explain some of the physical reactions that are said to happen. This being said, it is important to understand that reducing the kundalini experience to a detached observation of measurable components is not going to give you the complete picture. However much we would like to explain these phenomena physically by denying their subjective components any validity other than as a by-product of physical forces - we cannot.

Incorrect or misleading information on any system of psychophysical change work can have far-reaching ill effects. For the mentally unstable, thoughts taken to places not normally ventured upon in conscious or even unconscious states can prove devastating.

Interestingly in 'Kabbalah' (Judaism) it is accepted that esoteric exploration should only be pursued if the individual is fully grounded and has a meaningful connection back to the 'real world'. This typically means having a wife, husband, or child - a very important part of one's life as a possible lifeline back from the ethereal realm. This is real good advice. Whether you are practicing Kundalini awakening, astral travel, regression, or any other type of advanced consciousness exploration activity, it is important to have a strong connection to something on the 'earthly plane' (fancy word for the real world') that will always pull you back - no matter how far or deep you venture.

NB: This does not apply to 'Passive' seeking of Kundalini guided by a Yogi or spiritual leader.

When treading the path foundational or any other type of spiritual activity alone, (without another person/s guiding you) you are essentially dependent on handling any subsequent effects on your own accord. For example in hypnosis the hypnotist is always there with you in person (or by way of the precautionary measures placed in the recorded script) to ensure a safe and positive experience. Left on your own, you therefore become dependent on your own understanding of self, knowledge of the process you are participating in, the techniques you are using, and the innate ability to come back to full consciousness whenever you need to. This may sound simple, but it is also very important. 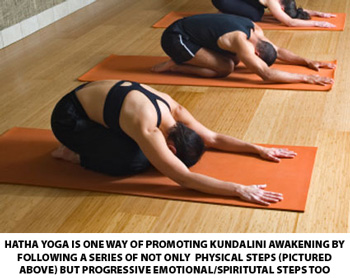 Another important consideration is that Kundalini Yoga is in many ways an introspective task. Thus it becomes important to find balance - taking the meditation off the mat and into the outside world. The inherent dangers of focusing for too long on one's internal world, and losing proper connection with the external world, are numerous. These include depression, social isolation, relationship problems, insomnia, disillusionment, and general emotional unrest.

The Nature of Energy Manipulation

Kundalini, like many other spiritual/alternative practices assumes the existence of unseen energy and the ability to manipulate it. Other practices that involve this include Reiki, Mesmerism, Energy Healing, certain types of meditation, prayer, spiritual healing, etc. Considering that science is unable to explain a lot of what is happening within many of these practices, it leaves open to questioning the true nature of unseen energy and, if in fact, the same forces are at work amongst all of them?

There is much to gain from choosing to undertake spiritual development. Kundalini is no different. What is important however, is to understand the reasons you are doing it and to be sure in your understanding of self. As with most issues requiring a solution, there is always an underlying or 'root' cause that is manifesting it. If you are having problems in life and think having a Kundalini awakening is going to fix everything, please think again. Also don't look at this as a 'quick fix' or 'fast-track' way to become connected with your purpose or spiritual goals. Think of it as part of a greater journey.

In fact for many people you may be better off not doing anything at all and simply dedicating your time working on basic levels of  meditation, presence, self-awareness, self-analysis, and training your mind to break free from conditioning and issues. Doing this is still inline with what the traditional Yogis and spiritual leaders taught about Kundalini anyways. Over time the persistent practice of these will ultimately start removing the 'blockages' in your energy centers and the Kundalini will happen in time naturally once you reach the right stage of spiritual and personal growth.

Like all things, if you do what you do with sincerity, genuinely, and devoted application, your heart will soon feel what your mind sees and then, and only then, can you expect to grow as a person. The truth is what will set you free in the end.