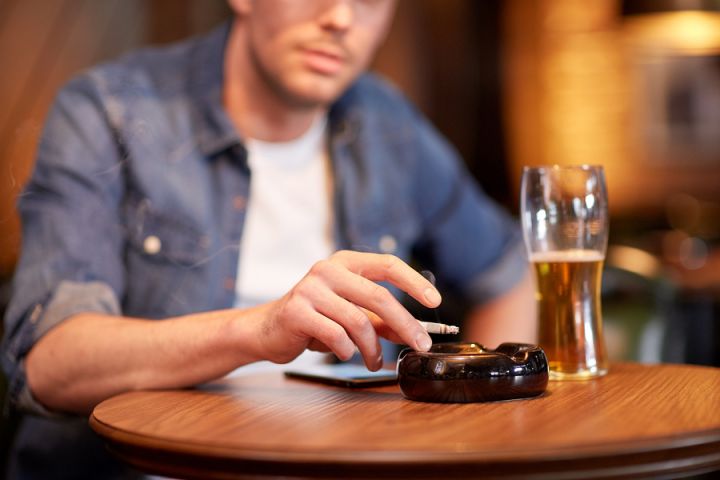 There are many different theories about addiction – what causes it, how it is maintained, why some people seem to be more prone to addiction than others. Some of these theories centre around the neurological underpinnings of addiction whereas others focus more on socio-psychological factors. This article will focus on an aspect of addiction theory that seems to have been overlooked for the most part – that of one addiction fuelling another. For the purposes of the discussion tobacco will be used as the addicting substance that in the first case contributes to an incorrect belief in the addictive nature of cannabis and for the second the role of alcohol in increasing the amount of tobacco smoked.

A vast number of regular cannabis smokers mix their marijuana with tobacco. This is done for several reasons – to make the mix go further, to make the smoke less harsh on the throat and so on. Many daily cannabis smokers insist that they are addicted to cannabis – that they must smoke every day. Although it is possible to be psychologically addicted to getting “high” – relying on marijuana to take the edge off life or to dull some emotional pain – there are no documented cases of anybody being physically addicted to it. What these regular users are experiencing is, rather, an addiction to the tobacco that they mix with their marijuana. Because the explicit aim of smoking is to get the hit from the cannabis, the unconscious mind confuses the withdrawal pang for nicotine for that of cannabis. Put another way the subconscious knows that when they smoke a joint or a bong the craving goes away – for a time – therefore it must be the cannabis. The subconscious is mistaken. It is the tobacco that causes the craving and the marijuana/tobacco mix is merely the mechanism by which the nicotine is delivered. Many regular cannabis smokers have discovered that the desire to smoke cannabis daily disappears simply by removing the tobacco from the mix – even if they are regular cigarette smokers.

This one is not so cut and dry (excuse the pun). Most cigarette smokers will agree that when they are drinking alcohol they tend to smoke more than they would otherwise do. Most so called social smokers only smoke when they are out drinking with friends and family. Most chronic alcoholics are also chain smokers. Why is this? Well the tendency with any drug addiction is to use more and more. The tolerance to the effects of the drug increases requiring the user to have a bigger hit to feel satisfied and the level of satisfaction decreases the longer the user partakes of the drug over time. With tobacco, this tendency is somewhat tempered by a couple of factors.

Firstly, there are the well-known adverse health effects of cigarette smoking and the ever- increasing social stigma associated with tobacco use. Also, there is the prohibitive cost of cigarettes these days as governments cash in on people’s addiction in the form of ever increasing taxes. So how does this apply to drinking? When one consumes more than a few standard drinks, an effect of alcohol is to reduce inhibitions. This is why people will often do and say things under the influence of alcohol that they would never do sober. This is also the reason that people smoke more when drinking. Normal inhibitions about smoking are reduced and thus the person begins to follow the tendency mentioned above with every other drug addiction – to use more and more and more. It is also why people who have just recently quit smoking are scared to go out drinking with their friends – they are aware that when their inhibitions are low it will be harder for them to say no to that first cigarette – and the next one, and the next.

It is not only tobacco smoking and associated behaviours that can be categorised as addiction fuelling behaviours. From social media to body image to fad diets and everything in between there is the potential for one set of behaviours to contribute to others that feed upon them and make them difficult to give up. The usefulness of any addiction theory will ultimately be dependent upon the person to whom it is being applied. Some people are comfortable with the notion that it is the way they think about themselves and their relationship to an addicting substance or behaviour that makes a difference whereas others feel disempowered and may seek outside modes of therapy or intervention to control or eradicate their addictions.

As with anything in life, an understanding of the underlying mechanisms behind why things happen the way they do can go a long way to keeping you in control of your behaviours. After all, we all have our so-called poisons and in the end it may be the wisest thing of all to remember the old adage - everything in moderation, even moderation.