Binaural Beats: What Are They & How do They Work?

Binaural Beats are two slightly different sound wave frequencies - one directed to the right ear and one directed to the left ear - that produce an audible 'beat' like effect in the way the brain receives both frequencies. They are used for brainwave entrainment, self meditation and some other resourceful purposes for self improvement.

How do Binaural Beats Create a Frequency? 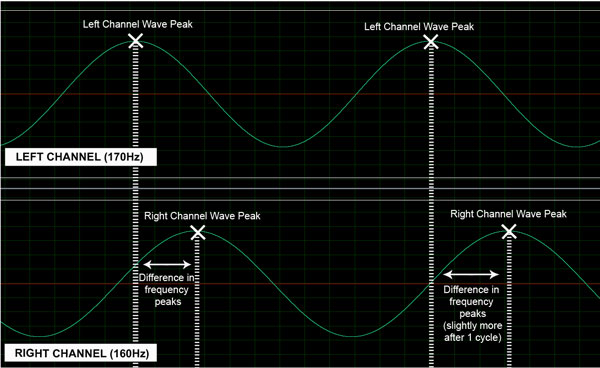 In the above diagram it can be seen that the two sound waves produced on the left and right channels are slightly different. It is this difference of 10Hz which created the binaural effect.

Each constant frequency, as can be seen in the left and right channels, is called a carrier note - and the difference between the two carrier notes will equal the frequency in which the binaural beat produces. Headphones must be used when using a binaural beat MP3 for this reason, otherwise the brain would not be able to be fully and equally receptive to the two tones and the effect would not be anywhere near as effective.

When Were Binaural Beats Discovered?

Binaural beats are not a new phenomena, contrary to popular belief. It may come as some surprise that binaural beats were actually first discovered in in 1839 by a German experimenter, H. W. Dove. With modern audio technology, binaural beats can be created to exactly replicate any certain frequency down the the most minute fraction.

What Binaural Frequencies can Humans Hear?

What Part of the Brain Picks Up Binaural beats?

According to an article published in 1973 by Gerald Oster, which is a well respected scientific source of brainwave and binaural research:

“Binaural beats are generated in the brain stem's superior olivary nucleus, the first site of contra lateral integration in the auditory system”

In relation to the brain's ability to mimic the sound wave frequency into it's own brainwave frequency, (Frequency Follow Response) a study by Smith, Marsh Brown in 1975 states:

“The frequency-following response originates from the inferior colliculus. This activity is conducted to the cortex where it can be recorded by scalp electrodes.”

The brain is essentially picking up on the phase difference of the two frequencies which make up a binaural beat - which in turn creates a third frequency: an amplitude modulated standing frequency. This is a wave like fluctuating tone, which depending on the frequency (Hz), the brain proceeds to mimic in it's own activity.

How Can Binaural Beats Affect Our Brainwaves?

It is important to note that binaural beats can either relax (lower brainwave activity into the deeper realms of Alpha, Theta & Delta) or stimulate (increase brainwave activity into higher Beta states).
This site, Alpha MP3s, is obviously focused on the Alpha spectrum which is associated with light focused awareness to a medium level of relaxation – 8Hz to 14Hz. It is interesting to note this because common misconception is that binaural beats are only designed to relax the mind – not to stimulate it.

Binaural beats can also improve brainwave synchronization between the left and right hemispheres of the brain. Because each hemisphere has it's own 'olivary nucleus', the receptor and processor for sounds that are conveyed from each ear, there is a cross communication type effect. The similar frequencies received by each ear and the corresponding centralized effect of the so called 'third tone' which creates the binaural sound, are thought to have an overall combining effect of the two sides of the brain.

The two hemispheres are connected by the corpus callosum. It serves as a conduit or a bridge between both sides. It is possible using binaural beats to strengthen the corpus callosum and to train it through repetition to relay information between the two sides more efficiently. This is useful for balancing creativity vs analyzing, and to generally improve one's awareness, focus and thought patterns.

About the Carrier Tone (frequency) in a Binaural Beat

The carrier frequencies or tones are the sounds used on the right and left channels to create the binaural beat. In theory these tones must be pure and unmodified. The only tone that is pure is a sine wave. This is a sound wave that is a smooth and repetitive oscillation.

Once you try start to use other more complicated sound waves such as sawtooth, square or triangular waves or the sounds from an instrument, then the tone loses it's purity. Although the harmonics, resonating frequencies and sub tones that can be created by these other sound waves can have interesting affects on brainwave activity in their own ways, they are not truly representative of a binaural beat. This is because impure tones create their own sub tones & harmonics and this will almost always corrupt the binaural beat target frequency.