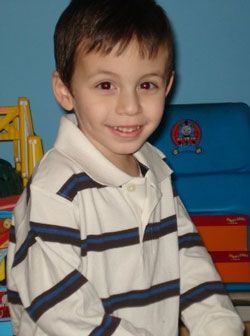 A Remarkable Story for all Parents with an Autistic Child

Andrew (pictured above) is seven years old and he lives with 'non-verbal' autism. His parents Denise and Phil have tried everything available to help him, from diets to hair dialysis to listening programs and vitamins and all with either no or very little benefit. The Staten Island couple were at their wits end and thought they had exhausted all of the hundreds of available avenues.

Phil and Denise are both members of the Autism Speaks foundation, so they were already familiar and active with many different concepts. One day Phil, the director of a successful Stock Market firm in Wall Street, happened to meet visitors John and Ryan from Rick Collingwood's company Mind Motivations. They both sat with Phil for an hour or so in the middle of the Stock Exchange telling him about the work that Rick had been doing with Autism via his sleep stories and special music combination. Phil was captivated by some of the ideas and asked for some copies of Ricks Children's Series, "Sleep Story" CDs that had been receiving at lot of anecdotal reports about helping Autistic children focus and communicate more effectively. 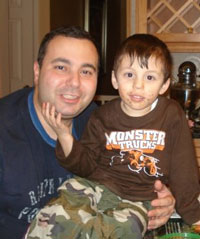 After receiving the CDs in the mail, Phil began to use them with his son every night as a bed time story. About a month later the couple were completely amazed and somewhat bewildered when Andrew began talking for the first time. The next change they noticed was that Andrew became more social and loving towards people around him - especially his other cousins with whom he was usually shy and reclusive. He began to keenly anticipate seeing them, whereas previously any interaction with them was something he simply did not want to do. Then he started hugging them and the other people around him - and this was nothing short of a miracle as he had never showed this type of affection before.

Phil and Denise also noticed that Andrew was sleeping better and not waking up during the night all the time; he also became more calm during the day and his attention span and general focus has heightened significantly. 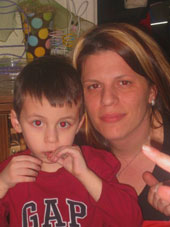 According to Denise: "I am over the moon, Andrew is now communicating for the first time and all our lives are just so much better."

Then Andrew began talking. Wow! For a child who had never spoken before this was nothing short of incredible. He started by simply repeating words that were said to him from people around him. Soon after that he became responsive to visual pictures and their meanings. Denise would show Andrew a picture of a cow and ask...

"What sound does his make?"

Even Andrew's speech therapist was amazed at the results he was achieving and he saw a definite improvement in his communication levels.

Andrew's teachers, many other parents of the children at his school, and other family members were completely awe struck. They just couldn't believe the difference in him. It was a like a butterfly had come out of it's cocoon.

Denise and Phil had not been expecting such a dramatic result from the CDs and said that Andrew's improvements couldn't be contributed to anything except playing a CD every night. It was the only thing they had done differently for the past couple of months. Even now, 3 months later, Andrew is still using the CDs and improving everyday. His parents are forever thankful and his other little cousins are extremely happy that Andrew is now talking and playing with them. 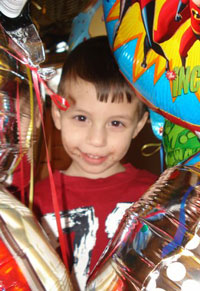 According to Denise, she even listens to the CD her self with Andrew.

"I also fall asleep listening to the CD, and I even know all the words that are on it. It just makes both of us fall asleep pretty much straight away."