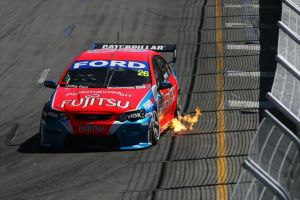 Britek Motorsport have revealed its second new sponsor in recent weeks with the announcement that Collingwood will be adorning their pair of Fujitsu Racing Ford Falcon's from the Bigpond 400.

Hot on the heels of the sponsorship from Sony Pictures release of the upcoming moview "Talladega Nights - The Ballad of Rick Bobby", both cars will have the front spoiler area adorned with the colours of Collingwood - namely ARIA award-winner Rick Collingwood, the Australian and Internationally acclaimed Hypnotherapist and Hypnosis Trainer.

Collingwood, who specialises in healing and sporting hypnosis will attack the V8 Supercar market using his Resonanz Recordings Hypnotherapy Compact Disc range and sees the relationship with Britek as the perfect platform to communicate with the ever-burgeoning ;hypnotherapy market.