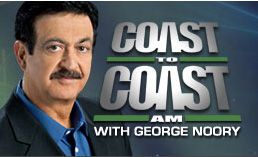 On September 23rd 2012 Giovanni was interviewed on the incredibly popular radio show Coast to Coast Am with George Noory. It was broadcast to over 2 million people for about an hour. On air Giovanni spoke about hypnosis, in particular using it for exploring the different processes that can happen within the trance state. He spoke at length about the onset of of OBE's (out of body experiences) through hypnosis, precognition and practical applications for the therapy.

The show was great exposure for Giovanni's work and for hypnosis in general. Towards the end of the interview Giovanni answered calls from selected listeners, helping answer their questions and give advice for their problems.

For those of you who have not heard of Coast to Coast AM before - it is an internationally syndicated late night talkback radio show. Originally founded by Art Bell, the program is now headed in the most part by George Noory. They cover progressive and 'new age' type topics such as consciousness modalities, progressive science, conspiracy theories, political agendas, and even aliens! It is indeed a great alternative that gets right to the heart of many issues which traditional media doesn't cover.

Unfortunately Giovanni's interview is not available for us to publish for free, however you can subscribe to Coast Coast AM and listen to Giovanni here - http://www.coasttocoastam.com/guest/lordi-giovanni/59326 It does cost $6.95 a month and for this you have access to all previous shows as well as upcoming interviews live too. In fact Rick Collingwood has been on the show a few times before too - see previous media releases - and you can listen to his interviews as well.

A special thanks to all the well wishers who wrote to Giovanni after the show too.